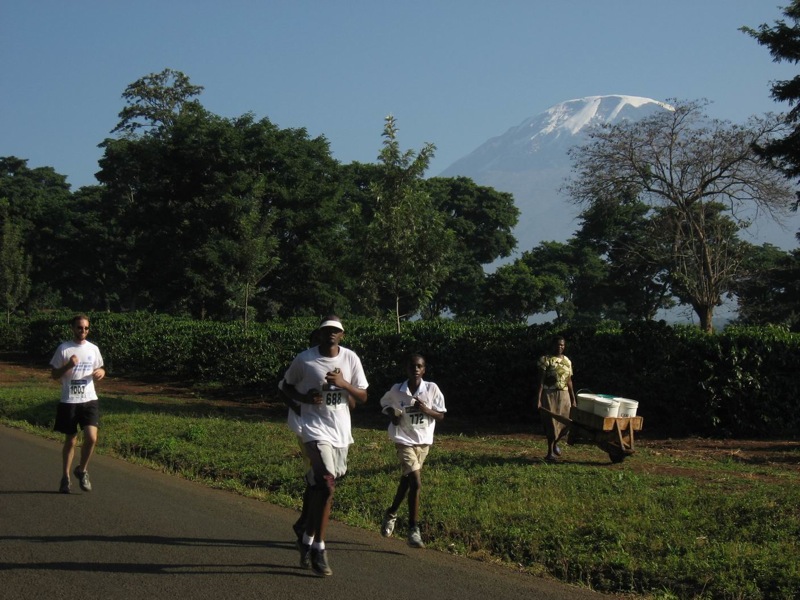 The big story from the half-marathon Sunday is that Aaron and I felt great! From our training times, I’d estimated it would take us 2½ hours to finish, but we actually came in well under that, at 2 hours even!

Other than the excitement of the race and the cool morning, we were wondering if having trained on hard, bumpy dirt paths helped our ankles hold up well on the smooth pavement. At any rate, it was fun!

The first half of the route is a long, steady climb up out of Moshi into the coffee fields above. (The low bushes in the picture are coffee.) The air was still very cool then, at 7 in the morning, and Kili was clear the whole time – just beautiful. Climbing felt good, and we were able to push on the steep parts without feeling like we were spending too much energy.

On the way we saw a number of people from the hash, a local running club that meets every other Sunday. It was fun to see familiar faces and to cheer each other on. Since the race followed an out-and-back route, we got to see everyone along the way!

Turning around at the top, Aaron turned on the jets and zoomed downhill! I was a little worried about destroying my legs, so I took it a little easier and stayed back through the end. I got a nice boost passing one water station that was playing “Under the Bridge” as I ran by. It’s nice to get a good song in your head, you know?

The other boost I got was noting that I had 3 miles to go at 1:35, and realizing I would be able to finish in less than 2 hours!

Valerie, Alaena, Jen & John greeted us at the finish, in the soccer stadium right across the street from our house. We hung out on the field for a good half hour, enjoying the company and the free cokes! Aaron and I were surprised to find ourselves not too tired after all, but since the GPS doohickey said we’d burned 1700 calories, I decided to eat all the rest of the day.

So, consider the running experiment a success. :) I’m totally doing this again next year, and even considering trying for the marathon!