I’ve been writing a bunch of rdoc lately, and ⌘S/⌃⇧R/↩/⌘W/⌘⇥/⌘R was starting to get pretty cumbersome. (That’s rake rerdoc from TextMate, close the output window, switch to Safari and reload.)

So, I remembered and downloaded Mike Clark’s stakeout.rb, and now I’m down to ⌘S/⌘⇥/⌘R—not bad!

Except I was a little troubled by the packaging, so I threw together a new RubyGem, adding in Growl support along the way: 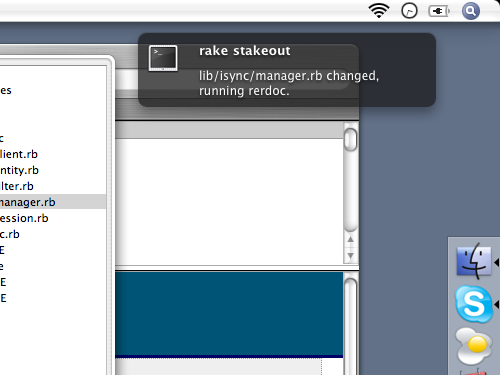 Think of it as a poor-man’s autotest, without being tied to testing.

Have fun! I’d love to hear if you decide to give this a try.