Update: The Perquackey site works a lot better now---I've just switched to a better word list and made the dictionary lookup much faster! 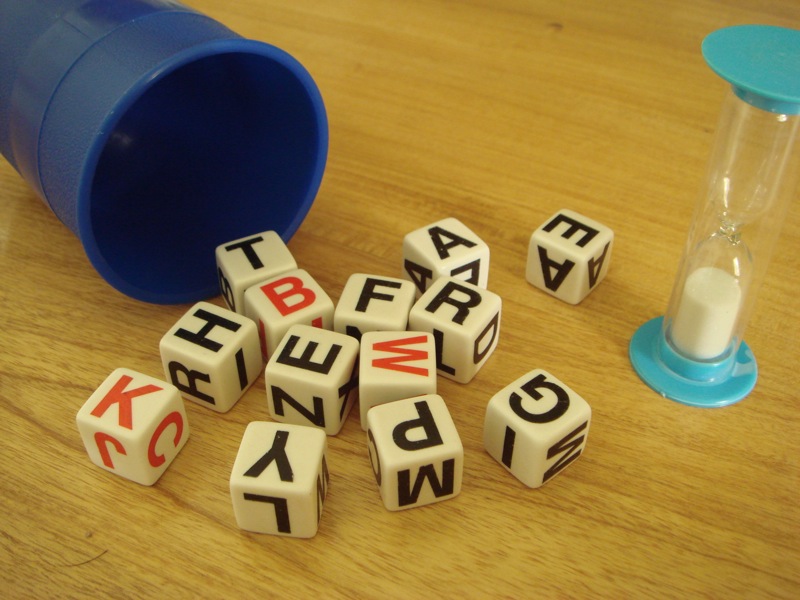 Valerie’s parents were here visiting for a few weeks, during which time her mom and I played Perquackey every chance we got.

Perquackey, pictured above, is a word-spelling game like Boggle, except word length matters, so you take more time to think.

Update: My bad. Alan Hensel points out that word length does matter in Boggle. What's additionally true about Perquackey is that it limits you to spelling just 5 words of a given length.

Which, apparently, gives you more time for trash-talking. Weeks before their arrival, I started getting gems like this in my inbox:

Perquackey players like you don’t grow on trees. They swing from them.

And, well, you just can’t let something like that slide. After the inevitable escalation, we’d raised the medium to an art form:

In the great wild Serengett,
A dik dik grazes, ‘till he’s met in
Millisecond lightning flash,
Tim-tumbled over, turned to
Hash.

Quite the scene
Under the sun,
Although another “death” shall
Come, when self-appointed Queen Per-
Kathy, unsuspecting,
Minces daftly,
Aligning letters one by one,
Slowly, surely, not much fun.

Then sit I in to take my turn
Egads! How did this kid here learn?
Round one completed, so the game,
Your skills shown up to be quite lame.

The alert reader will note the first letters of each line spell out “I am the perquackmaster, yo.”

Sadly, though, age and treachery won out over youth and intelligence. But I held my own spelling interesting words. Between the two of us, “style points” were awarded for archaic, aplomb, axioms, eclipse, imbues, poseur, pundit, urethra.

Finally, when the time runs out, you always wonder what you missed, so I’ve written a Perquackey word looker-upper.

It’s a little slow, but I’m working on it. (On a geek note, the best change so far has been splitting a string into letters with unpack 'c*' instead of split //—that way, I’m comparing letters as integers rather than strings of length 1.)